How does it all work? 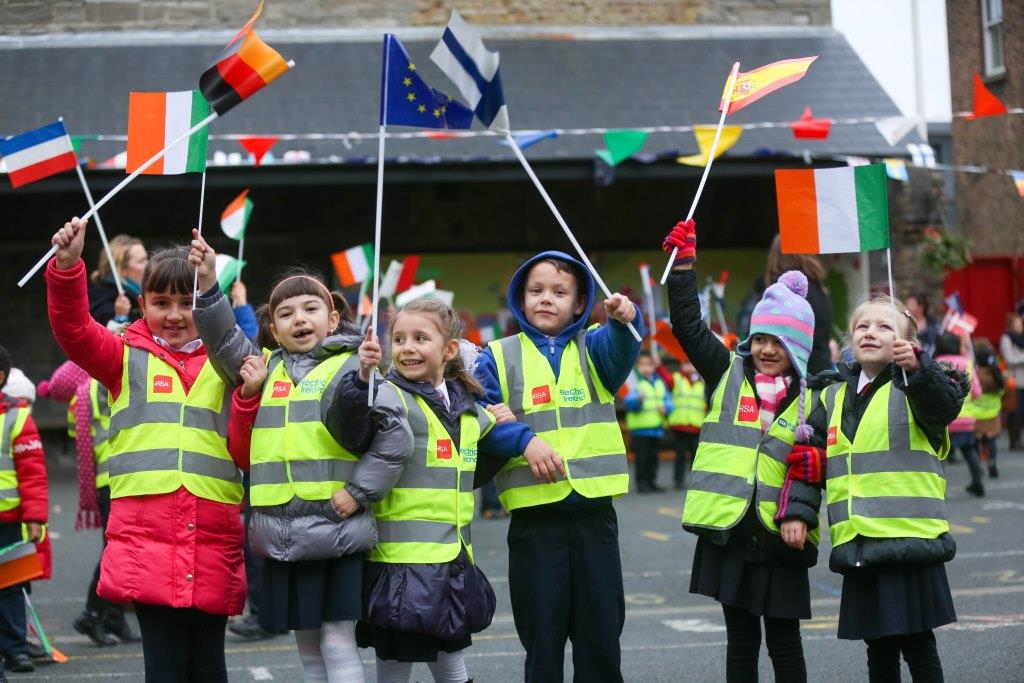 There are four core learning pillars of the Programme:

When completing the above, we urge each participating school to carry out projects and tasks that include information about:

One of the requirements of the Blue Star Programme is that the foundation and development of Europe is explored. While the history of the European Union is important, all European history is considered relevant, regardless of whether it predates the foundation of the EU, as it can provide perspective to pupils about the Europe they live in today. To keep things as curriculum friendly as possible, some ideas for this element include:

One idea would be that teachers (particularly of 5th/6th classes) could use books such as ‘The Diary of Anne Frank’ or ‘The Boy in the Striped Pyjamas’ to provide a literary context to the historical content – thus, providing cross-curricular integration.

For the younger classes, pupils could select a European country and carry out a whole class project on the history and traditions of this country. For example if studying Italy, pupils could learn about Ancient Rome. Alternatively, important historical figures could be selected by different classes and projects could be completed on them, i.e. Hans Christian Andersen (Denmark), Ludwig Van Beethoven (Germany), Bram Stoker (Ireland), Santa Claus (Finland), etc.

Ideally when researching their historical project, the pupils will use technological means such as computers and the internet to research, compile and present their finished product. For example, a presentation could be made in PowerPoint format or through the production of a short film.

For this section, we ask pupils to prepare a short project on an EU country. Examples of elements that could be included in this project are describing or illustrating a country’s flag, capital city, population, language, what it is famous for, and its similarities and differences to Ireland. In the Geography curriculum already in place for Irish schools, it is recommended that from 3rd class on, pupils should carry out studies on EU Member States. Participating Blue Star teachers could plan collaboratively in selecting which countries are to be studied throughout the school year.

For the younger classes, one idea for their participation could be if ‘mini-studies’ were carried out based on EU countries – this works especially well if there are pupils in the class that have a close association with another EU country. Alternatively, the younger pupils can learn basic geographical information about various European countries, i.e. capital cities, populations, rivers, mountains, famous monuments and flags. 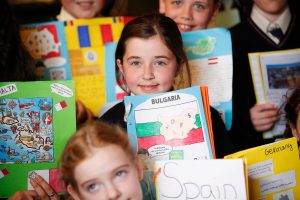 Similarly (and for all class levels), parents from other EU countries and the wider community could be invited in to talk to the pupils about the country in question and also to show various artefacts, i.e. stamps from their home countries, samples of national food, etc. Indeed, if there are pupils from a different European country in the class, it might be an idea to pick their country so that they can share their own experiences. A lot of schools have done this in previous years of the Blue Star Programme and found it really useful and informative. It involves the entire school community and brings a strong creative element to the Programme, while also helping to promote greater cross-cultural awareness among school pupils.

This element is probably the most enjoyable for the pupils and also the teachers. All class levels would be capable of participating. It can be integrated into the ‘Arts’ section of the national school curriculum in a variety of ways. The following are some ideas:

Under the Cultural element, pupils can learn about famous Europeans from various walks of life, i.e. sport, fashion, music, etc. Also, if a school is fortunate enough to have cooking facilities, it is a nice idea to do some ‘European cookery’ for the children. Basic phrases in other languages can be taught to the children and from our experience with the Blue Star Programme over the last five years, this is something the pupils really seem to enjoy. 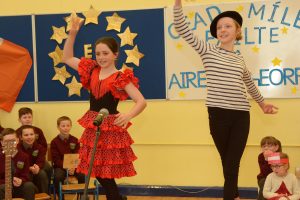 For this module, it has proven very popular in the past for schools with pupils from other European countries to integrate them in the Programme by doing a play around their home country, having their parents come in to speak about their home country, or to even bring in traditional food and treats. This is an excellent way to get a first-hand insight into other European countries.

We encourage schools to promote their work in the local community, through an exhibition, or in the local press for example and this has proved hugely successful in spreading the word of the Programme throughout the community. This aspect of the Programme could involve the whole school, including junior classes.

There is a lot of scope within this section for creative input from pupils. We would like pupils to experience working in a team and the teachers know best whether the pupils should be divided into separate teams or work together as an entire class.

In this section, pupils will learn about how the EU works, how the different institutions cooperate with each other and the impact of the EU on their lives. We suggest the work in this section to be activity based. For example, pupils could complete a project on a day in the life of an MEP, learn about the roles and responsibilities of each Commissioner, hold a mock European Parliament session or run a mock election/referendum.

Learning about the EU Institutions is very much part of the 5th and 6th class Geography curriculum so studying the role of the European Parliament and the European Commission can be very neatly integrated. It also provides a great opportunity for pupils to learn about the role of national parliaments.

This is a great opportunity to reach out to your local MEP or TD for a school visit. As part of this section, we ask schools to write to their local representatives asking them to complete a questionnaire on their work and to invite them to visit the school. If it is not possible for an MEP or a TD to visit the school, we encourage schools to contact other public representatives or Ambassadors of European countries to invite them to come to the school to discuss European issues. The interview can be done via Skype or via email and it is a great way of bringing the Institutional element to life! 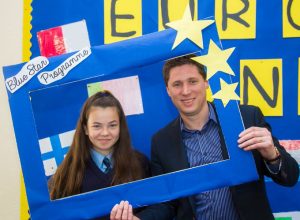 For the junior classes, younger pupils could paint the European flag and learn about how the EU was founded, why Ireland joined and the number of current Member States. Many schools have also taught the younger pupils about the currencies used in the EU and the EU anthem.

The Institutional section also links in well with the SPHE curriculum in looking at participatory democracy, citizenship and the wider world.

When researching their projects, pupils are encouraged to use all means of technology available to them, including online resources. Previously, many projects were presented using interactive tools such as PowerPoint, video clips, audio clips, blogging sites and school websites. The use of technology among the different schools in the past has been extremely impressive and brought the goals of the Programme to life in a technological sense.

As part of the Blue Star Programme, additional elements related to active citizenship and political awareness are sometimes included. 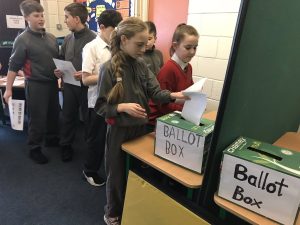 Similarly, during Year 3 and 8, special focus was given to the European Parliament elections which were held in May 2014 and May 2019. Again, all participating schools were required to learn about the European Parliament elections, the electoral process and the importance of voting. Schools were also encouraged to hold mock elections during the year which allowed them to actively engage with the political, social and moral issues that concern them by giving them the opportunity to stand as party candidates and canvassers. Pupils voiced their opinions by engaging in creative exercises which provided an excellent introduction to the mechanics and issues involved in an election. The feedback was very positive from this element as pupils genuinely appreciated the different learning methods associated with the elections. It was also a great opportunity to involve the whole school community in the Programme.

The Civic Society Element for Year 10 will be revealed to all teachers who register with us for the new term!

The Programme should culminate in an event on or around Europe Day (9 May). This is often a highlight of the Programme as the school community gets an opportunity to showcase and celebrate its achievements throughout the school year. 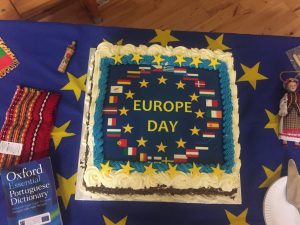 Europe Day is a good excuse for the children and teachers to display all the Blue Star work and for the school to make a conscious effort to promote all things intercultural and European. The simple ideas for Europe Day often work the best!

Schools in the past have held European food fairs where pupils and the wider community can taste food from all over Europe, parades in the local community, photography or art exhibitions inspired by the work of famous European artists. It is a great idea to make an effort to present the Blue Star work to a wider audience or out in the community maybe the local library, County Council office or community centre.

For the last seven years, we have encouraged all schools to participate in the ‘Handshake for Europe,’ whereby all pupils and teachers shake hands with each other to recognise the solidarity that exists among European citizens and to celebrate the diversity that comes with being part of a strong and inclusive Union. We have brought these celebrations online as a result of the Coronavirus pandemic, and will be ready to do so again if needs be!

‘VIP visits’ are a long standing tradition of the Blue Star Programme where MEPs, Ambassadors, TDs, Councillors, Journalists, Professors (and much more!) visit schools and speak to the pupils about their relevant field in regards to Europe. We believe that VIP visits are a great opportunity to showcase the pupils’ work and knowledge as part of the Blue Star Programme, and for pupils to learn about the EU in a practical, personable way.

Sadly, VIP Visits have of course become more difficult to arrange due to the Coronavirus pandemic. However, if you and your pupils have any questions based on your Blue Star Programme work, why not write to your local MEP or one of the EU Ambassadors? MEPs and Ambassadors love getting involved in the Blue Star Programme and seeing how pupils around the country are learning about the work of the EU, so don’t hesitate to drop them a line!

The Blue Star Programme will provide all schools with a VIP Question Form, which you can send off to any of the listed MEPs and Ambassadors who will hopefully write back! Find out what a day in the life of an MEP is like, or ask an Ambassador what their favourite thing about Ireland is – we’ll leave the questions to you!